I first discovered Wang fresh noodles at 99 Ranch Market. The noodles come in three varieties, udon (thick), knife-cut (flat), and somen (thin). My favorite are the thicker udon or knife-cut noodles. Now, 99 Ranch is not exactly the Asian Whole Foods. 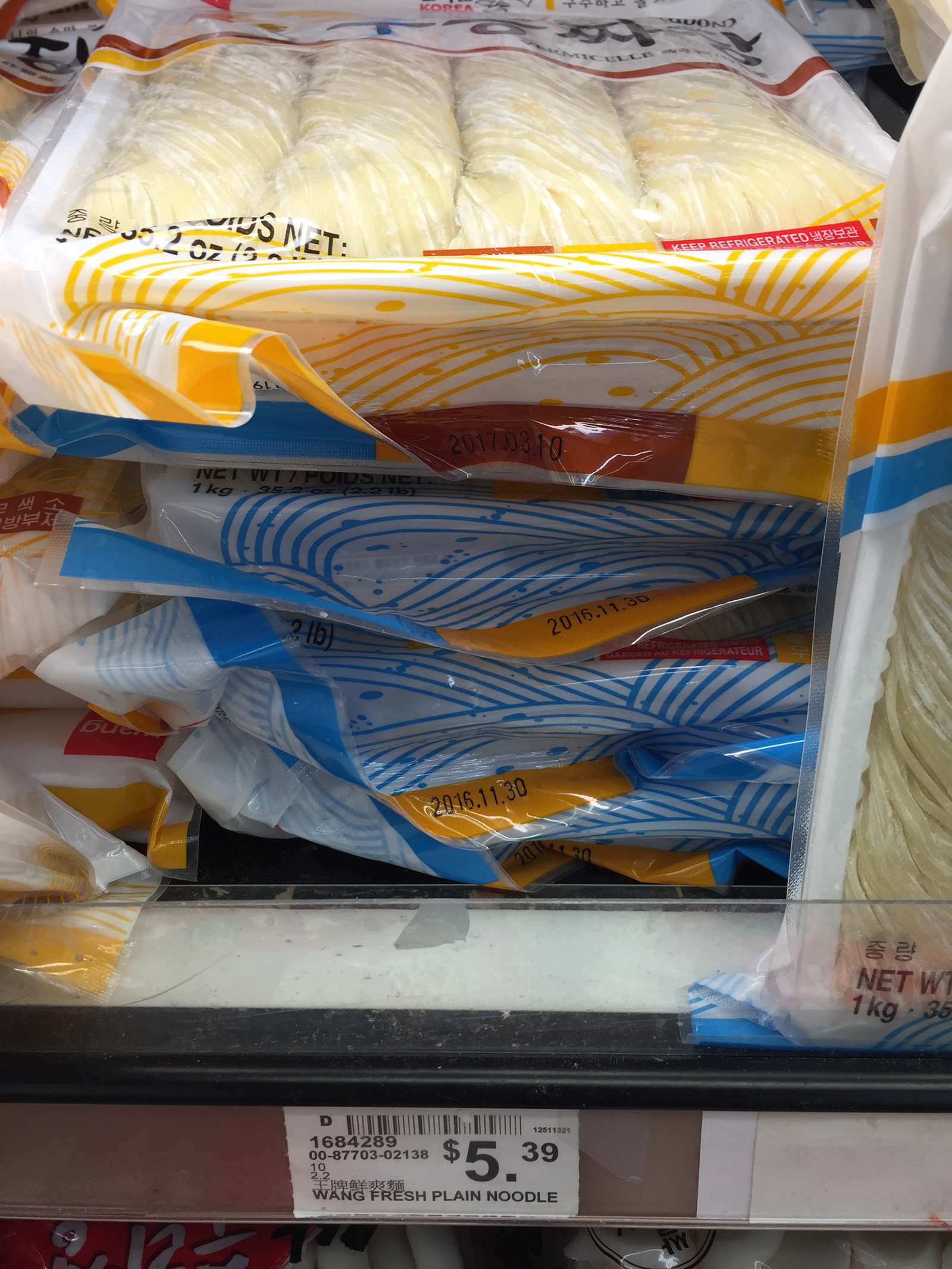 So, imagine my surprise when I discovered that the Korean supermarkets (i.e., Galleria and Hankook) were selling this same brand of noodles for less. Much less. $2.99 instead of $5.39. I would expect that supermarkets would have a 10-15% price difference on certain items, but for 99 Ranch, of all places, to charge 80% more was quite shocking! 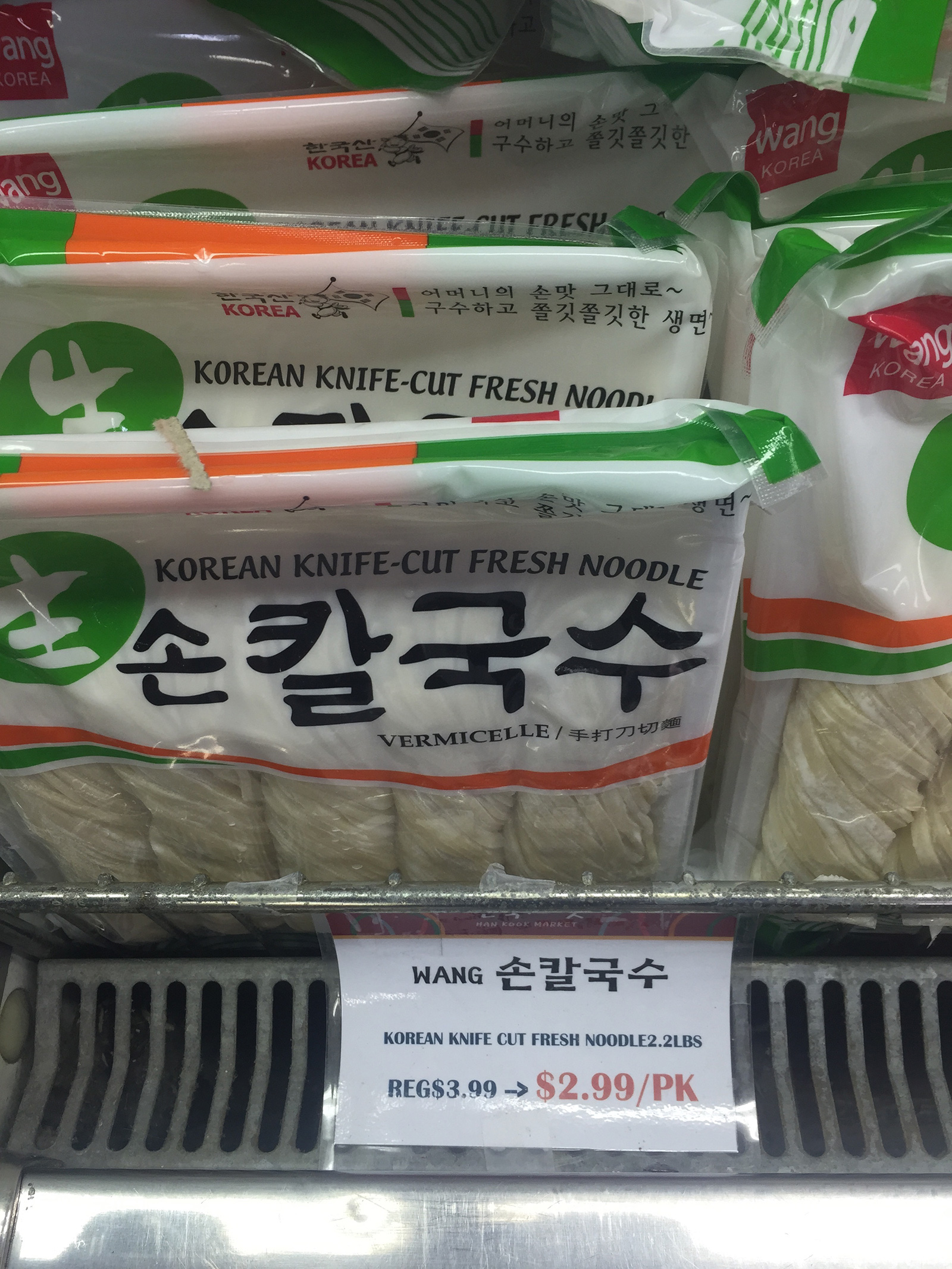 Ever since I discovered this, I have been checking noodle prices every time and this price disparity is quite consistent.

With just over a week before tax day, I was asked if I had purchased TurboTax yet. Since Costco is usually quite competitive, I had taken a photo of the TurboTax kiosk a few weeks back. 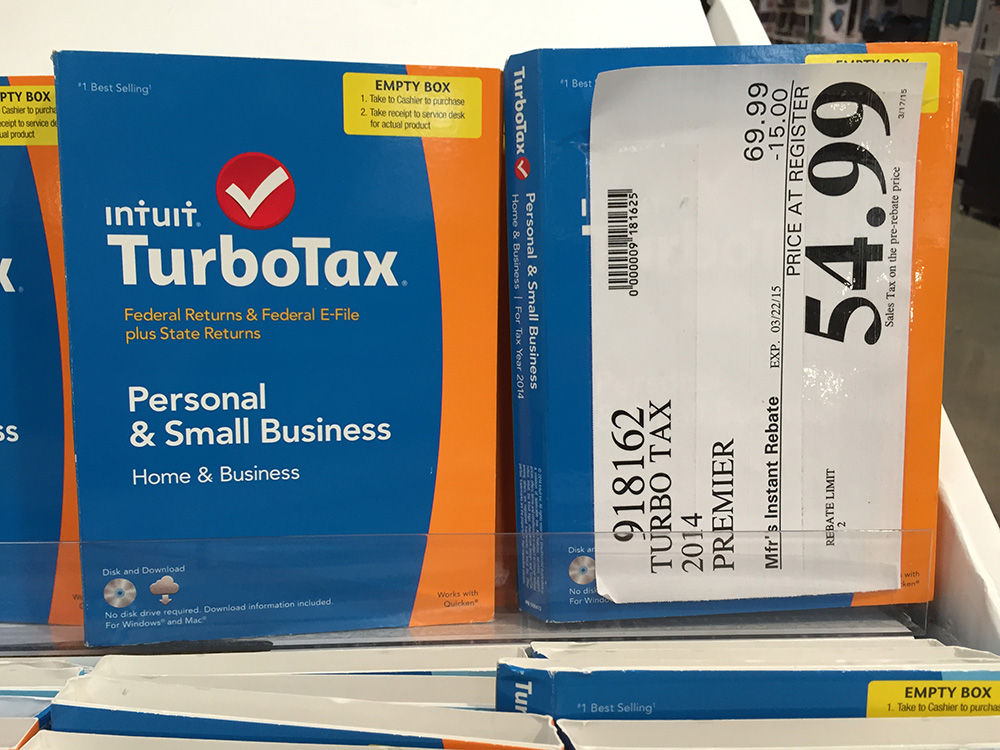 Amazon was selling TurboTax Premier for $54.99. At first glance, the price may seem to be the same. However, if you look at the footnote on the Costco price tag, it says, “Sales Tax on the pre-rebate price.” At the local Costco, a sales tax rate of 8.75% translates into a sales tax of $6.12.

Your sale of electronic data products such as software, data, digital books (eBooks), mobile applications, and digital images is generally not taxable when you transmit the data to your customer over the Internet or by modem. However, if as part of the sale you provide your customer with a printed copy of the electronically transferred information or a backup data copy on a physical storage medium such as a CD-ROM, your entire sale is usually taxable.

A few years ago, I purchased a small trash can from Target. At the time, I thought that the design was quite ingenious since it was a perfect fit for the ubiquitous plastic bags that all stores provided. The trash can even had two loops on the side to secure the handles of the plastic bags. Of course, I did not anticipate that many cities in the San Francisco Bay Area would prohibit stores from distributing these bags at check-out.

As our supply has dwindled, I’ve looked elsewhere for similar plastic bags. But, even this box of 4 gallon bags seemed expensive at 11¢ per bag. On a recent trip to Costco, I saw a box of T-Shirt Bags, those verboten plastic shopping bags. At 1,000 count, the price per bag was 1.5¢. Now, buying plastic shopping bags just to use as trash bags seems profligate. But, the only difference between shopping bags and trash bags is the handles.

Regardless of whatever new restrictions city government may present, I have enough plastic trash bags to last until my retirement. If I use one bag per week, I can last almost 20 years. Now that’s a smart buy. If I want to be even more economical, I bring them inside the store to use for groceries first before converting them to use as trash bags. 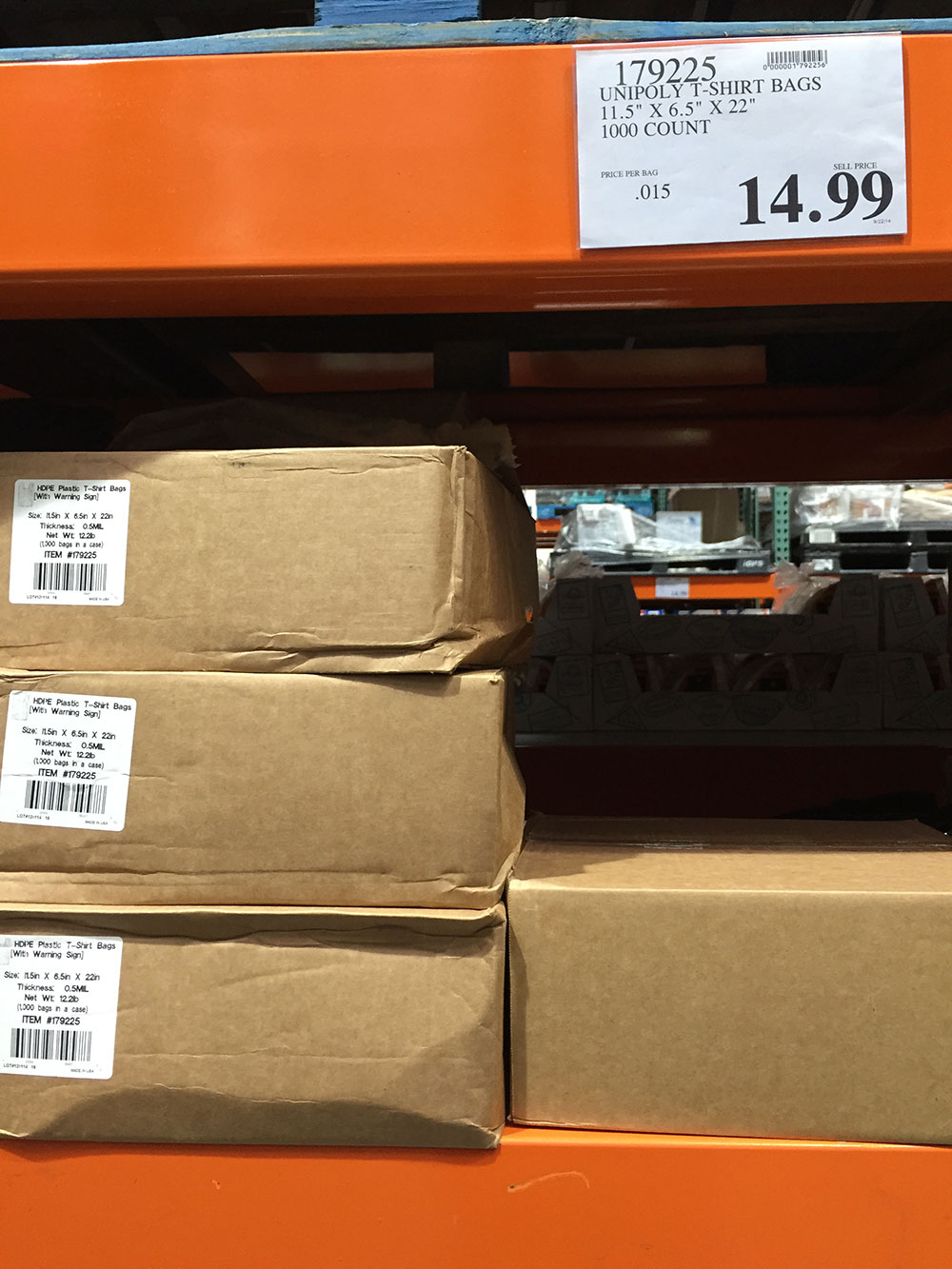 How can you teach math in a way that is relatable to young children? One approach is to look for math lessons within their daily lives. Our lesson was a study in the economics of chewing gum. Target sells a pack of Trident gum for 97¢. The Target website doesn’t show the price for Trident gum, but Google Shopping Express reports a price of $1.12 per pack. (Interesting!)

Costco sells Trident gum for 73¢ per pack, but you need to shell out for a 10-count box. Out of curiosity, I stopped by a Safeway, which was selling it for $1.49 per pack. Yikes! That’s more than double the Costco price. But, the Safeway website has it currently at 99¢ per pack for a limited time with a Safeway Club card.

Shopping at Costco is so much easier because you don’t have to think whether you are grossly overpaying for an item.

A number of factors come to mind when the needle of the fuel gauge starts edging towards the empty mark. Of course, I prefer the closer gasoline station to the one farther away. I also prefer the lower cost station from a major brand of gasoline. Finally, I’ve timed the pumps and know that the Shell station dispenses gasoline faster than the Valero one.

But, today, the choices were between Valero and ARCO. I first pulled into Valero, but all the pumps were being used. Not wanting to wait, I headed across the street to ARCO. For regular unleaded, ARCO was selling it at 3.959 per gallon while Valero was selling it for 4.059 per gallon. From experience, I knew that ARCO did not accept credit cards and imposed a fee on debit card usage. The precise amount was 35¢ per transaction. So the quick calculation was that after 3 ½ gallons, I should be better off at ARCO despite their debit fee. Not a problem since I had to fill almost the entire tank. 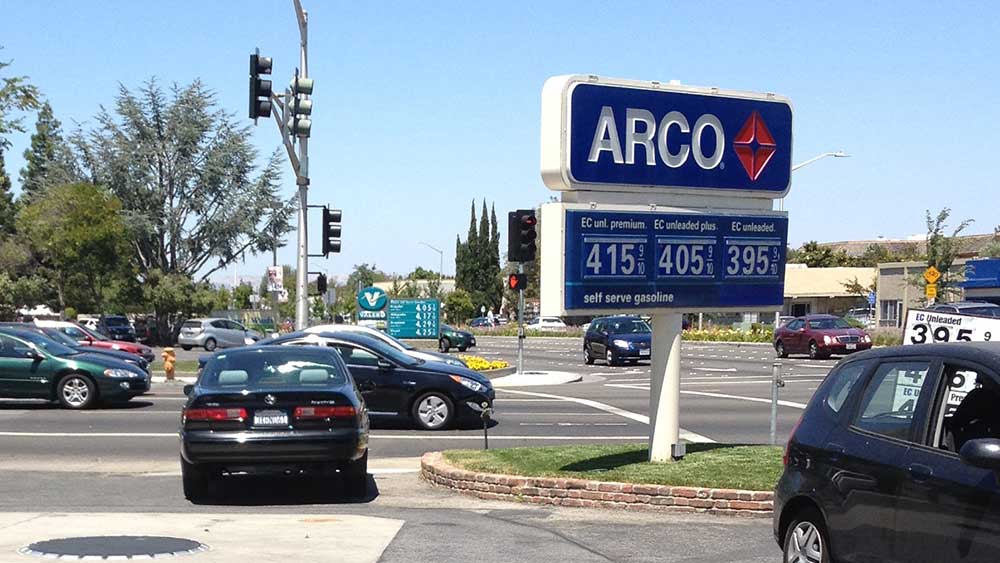 If I purchased the same amount and type of gasoline at Valero, the cost of 16.538 gallons for $4.059 is $67.13. At first glance, ARCO is saving me $1.31 for the fill-up. However, I would not use a debit card at Valero. Instead, I would use a credit card like American Express Blue Cash which rebates 2% of gas station purchases. Including the rebate, the total cost drops to $65.79, or 3¢ cheaper.

So, paying for gas at ARCO with cash secures the lowest cost. However, you have to carry around quite a bit of cash just to top off the tank. The days of 79¢/gallon gas and a $20 fill-up are long gone. The next best option is a regular station with a 2% cash rewards credit card, which slightly edges out the ARCO debit card choice despite the 10¢ per gallon spread in gas prices due to the debit card fee.

When worlds collide, it could be an epic disaster or the best of both worlds. In this case, a brand of ice cream that I occasionally buy shows up at Costco. Three 32-oz containers of Three Twins Madagascar Vanilla Ice Cream for $10.99. That’s $3.66 for each delicious container of sweet ice cream. 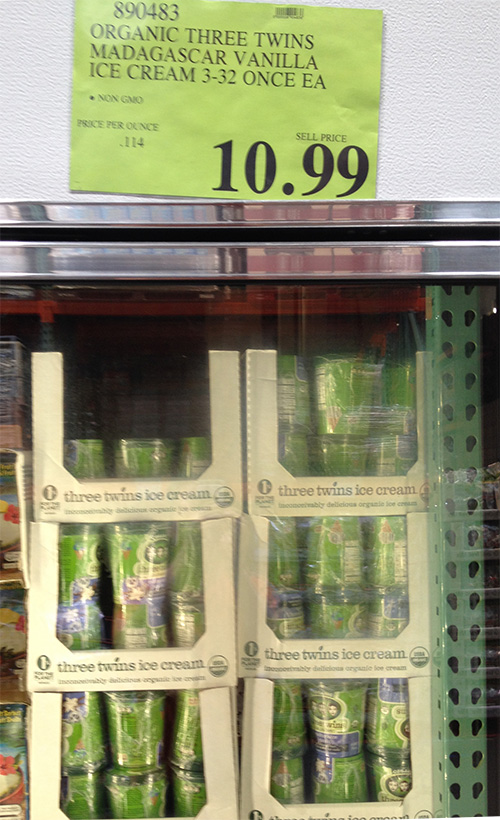 Unfortunately, when I went back the following week, it was out of stock. I hope this will be a permanent item.

I rarely set foot inside Safeway. However, I had to replenish the supplies of King’s Hawaiian Sweet Rolls before breakfast one morning. And, Costco does not open until 10:00 A.M. So, Safeway it was. 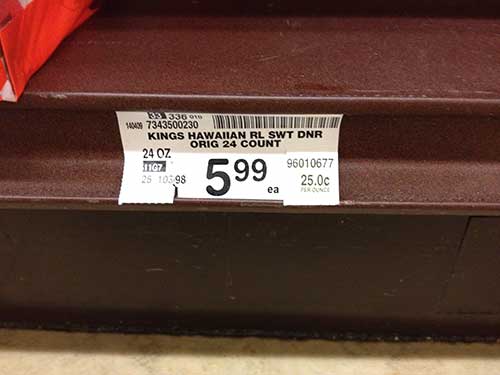 For the most part, Costco’s game is to sell in bulk. Now, if Safeway and Costco were selling the same quantity of the same item, would there be a significant price difference? 24 Hawaiian sweet rolls for $5.99 at Safeway, but only $4.49 at Costco. 25% cheaper, which probably explains why I go months between Safeway visits. 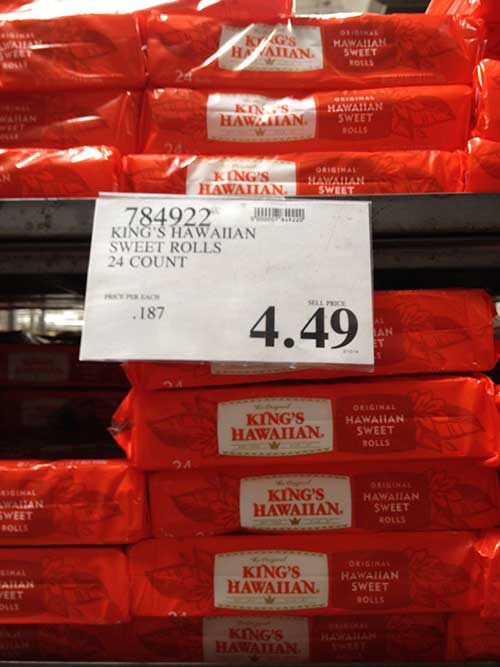 As great as Costco’s prices can be, a manufacturer’s instant rebate, when available, makes the deal even sweeter. 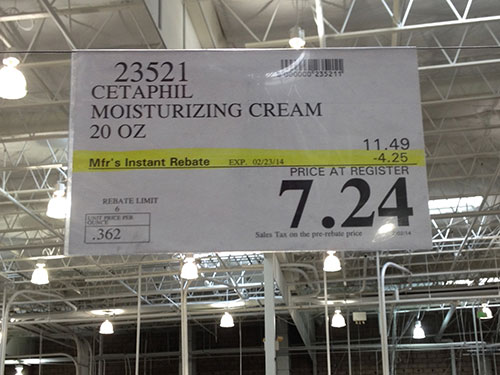 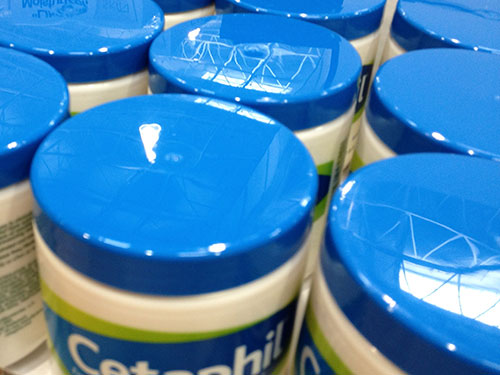 The Amazon Mobile iPhone App is a great way to “trust, but verify.” I spotted the Zojirushi NL-AAC18 for “sale” at 99 Ranch Market, with an enticing $30.00 off label. However, just because a product is selling for less than the MSRP, it doesn’t mean that it’s a bargain if everyone else is selling for less. 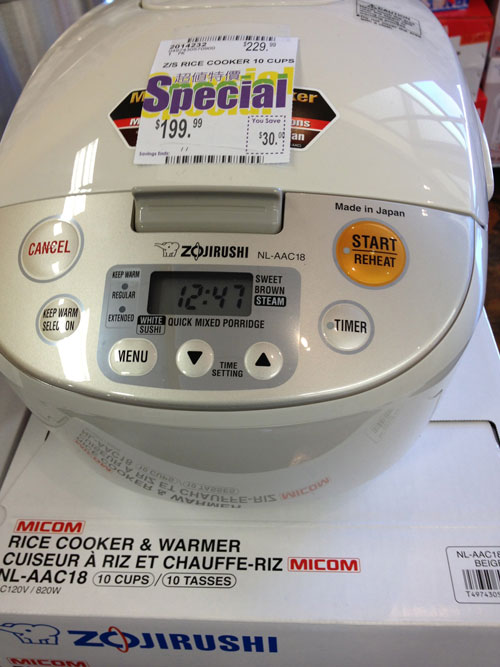 So, I opened the Amazon Mobile app and scanned the bar code, which revealed a $217.49 price with a $50.51 savings. Not sure how these have different list prices. So much for how bricks and mortar cannot compete with Amazon. 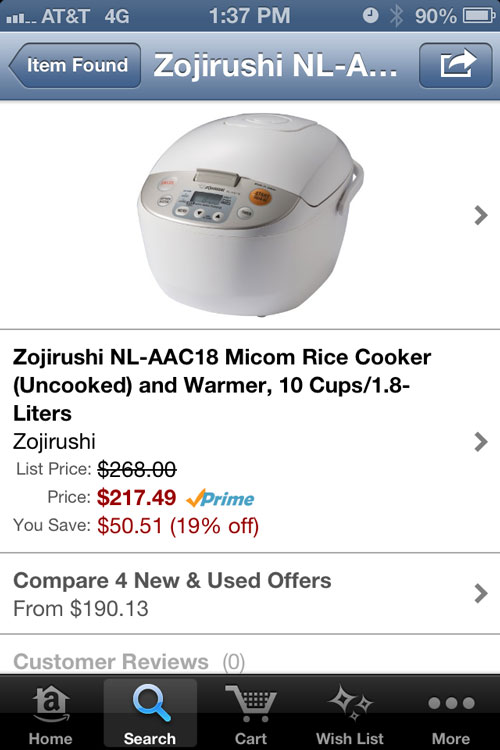 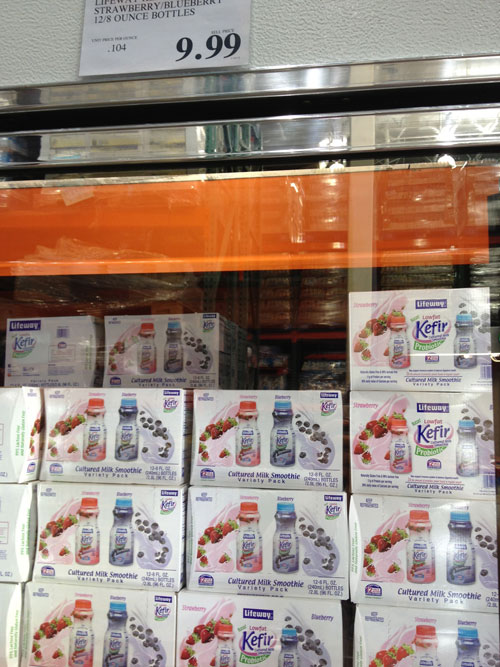 The question is whether a 12-8 fluid ounce package of kefir would cost less per ounce than a single 32 fluid ounce bottle of kefir. 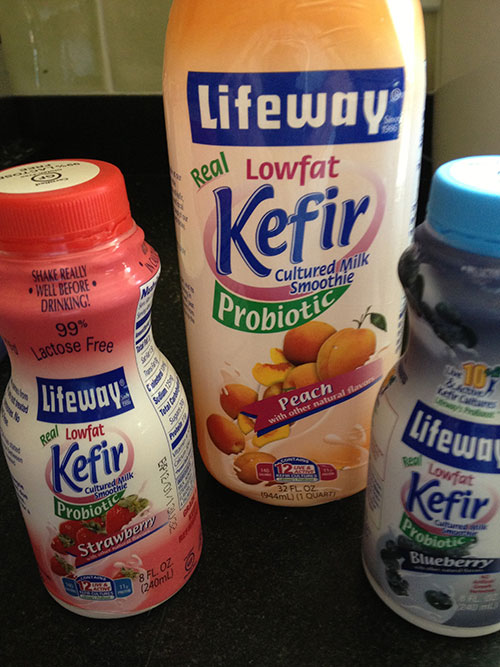 So, a lot of small bottles purchased together costs less than one larger bottle, despite all the extra packaging.