Costco Shortages in the Age of the Coronavirus

The arrival of the coronavirus has transformed the Costco shopping experience. Once upon a time, Costco was a convenient place to shop for food and household goods. And, if I visited a store with a familiar layout early enough in the day, I could be in-and-out quickly.

Those days are officially over. Just getting into the store could require an extended wait. With Santa Clara County’s new order that imposed customer capacity limits and a six-feet social distancing requirement when waiting in line, the back of the queue came close to curling out of the parking lot.

Once inside, items that were once in abundance now have strict purchase limits. I’ve seen what happens when someone attempts to buy more units than permitted. The item is flagged at the cash register, and the customer cannot purchase the extra unit.

I’ve also seen Costco reduce the item limits. A few weeks ago, customers could still purchase 2 packages of toilet paper, paper towels, water, Clorox wipes and rice. Now, those limits have been reduced to one per customer. These limits also apply to milk, eggs, and fresh chicken. At first, I didn’t understand why people would be suddenly eating more eggs and drinking more milk. However, now I understand it.

If the adults are working at home and the kids are home from school, that’s a lot more mouths to feed. You might have noticed the same in your household if the food in the refrigerator no longer lasts the week.

Have you ever seen empty store shelves in America before? I am still shocked that of all the products people are hoarding, toilet paper is one of them. Costco is well stocked and has implemented rationing, but Target can’t keep enough on their shelves. We are already in our third week of this coronavirus panic, and some stores still have not caught up to the demand.

Mid-Autumn Festival is on Friday, September 13th. Not only did we buy our mooncakes early this year, we already finished our entire box. Instead of the usual mooncakes, I tried a box of MX Lava Custard Mooncakes 美心流心奶黃月餅. So good.

I find that the standard mooncakes with lotus paste and salted yolk to be heavy and dense. One sliver is more than enough. And, at the end of the night, I am begging the guests to take the leftovers home.

In contrast, these are light and bite-sized. The serving recommendation is to re-heat for a few seconds in the microwave. It does make a difference in the temperature of the mooncake, but the center doesn’t much change texture. At first, I was expecting the custard to stream out like with a chocolate lava cake. I tried varying the heating times, but no amount of heating produces that effect. Still, it’s a great alternative to the traditional mooncake and a perfect size for a snack.

Marina is selling the MX Lava Custard Mooncake for $59.99. That was the best price I found. 99 Ranch was selling the same mooncakes for $72.99.

While I really appreciate the convenience of Costco, I prefer some purchases to go through Amazon just because I have an online record of all my previous orders.
{ 0 comments }

The Contigo Thermalock water bottle is a great deal at Costco. With a capacity of 2½ cups, it keeps my cold drinks cold throughout the day and allows me to monitor my fluid intake more easily. This was my first insulated water bottle. Of course, the first thing I did was test whether it could keep cold drinks and hot drinks at a stable temperature. It works so well that I have not grabbed my other uninsulated water bottles at all.

The positives are (1) it’s insulated; (2) the $6.50 per bottle price; and (3) the strap that keeps the cap attached. The design is a bit utilitarian. Not as good looking as the S’well, but also not four times as expensive either. 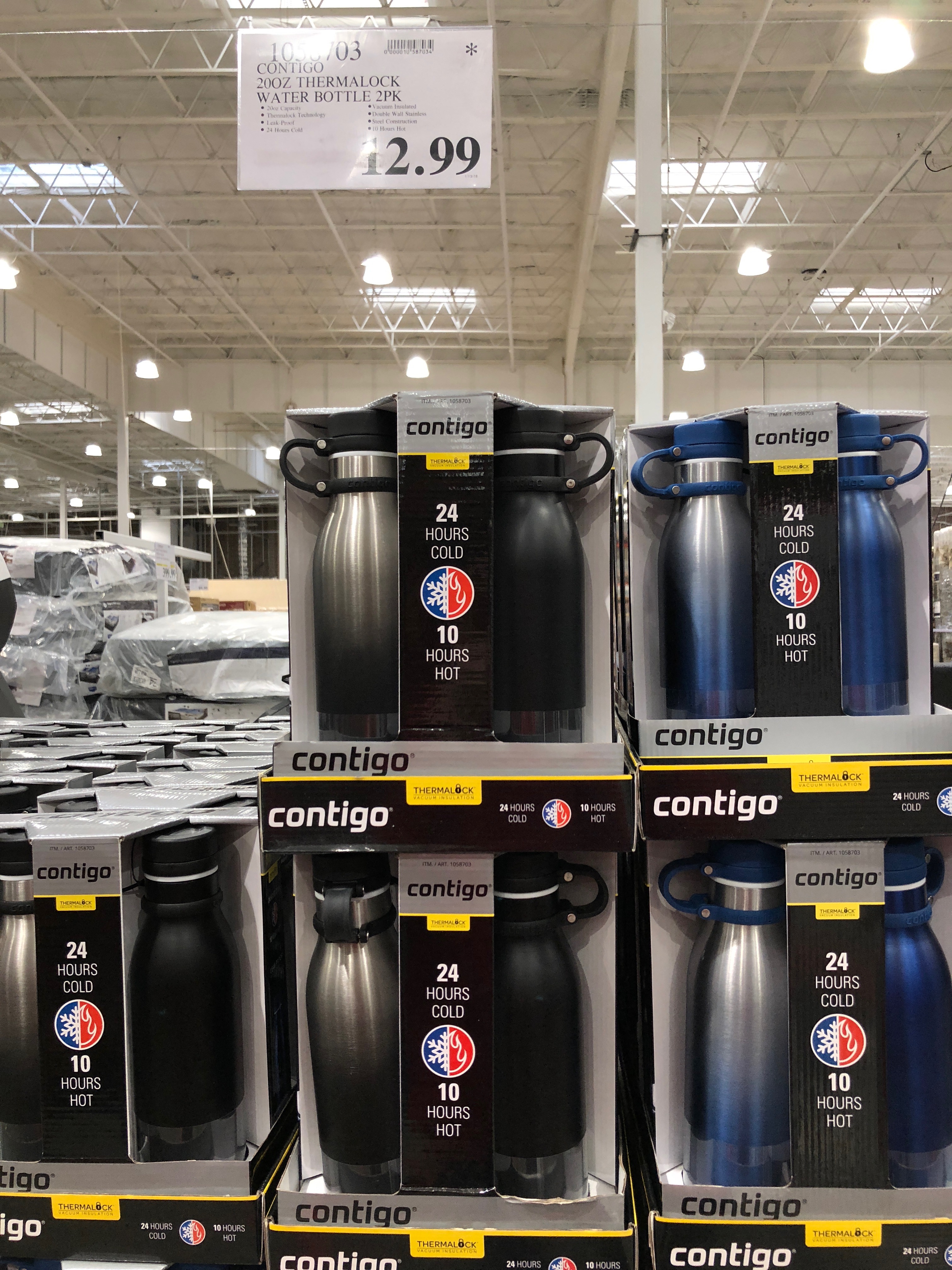 Costco is selling a 512GB Lexar Portable SSD (SL100) for $124.99. That’s an odd product since the SSD really shines as an internal drive. For an external drive, I’d rather pick-up a large capacity external hard drive than a bunch of smaller capacity SSDs. 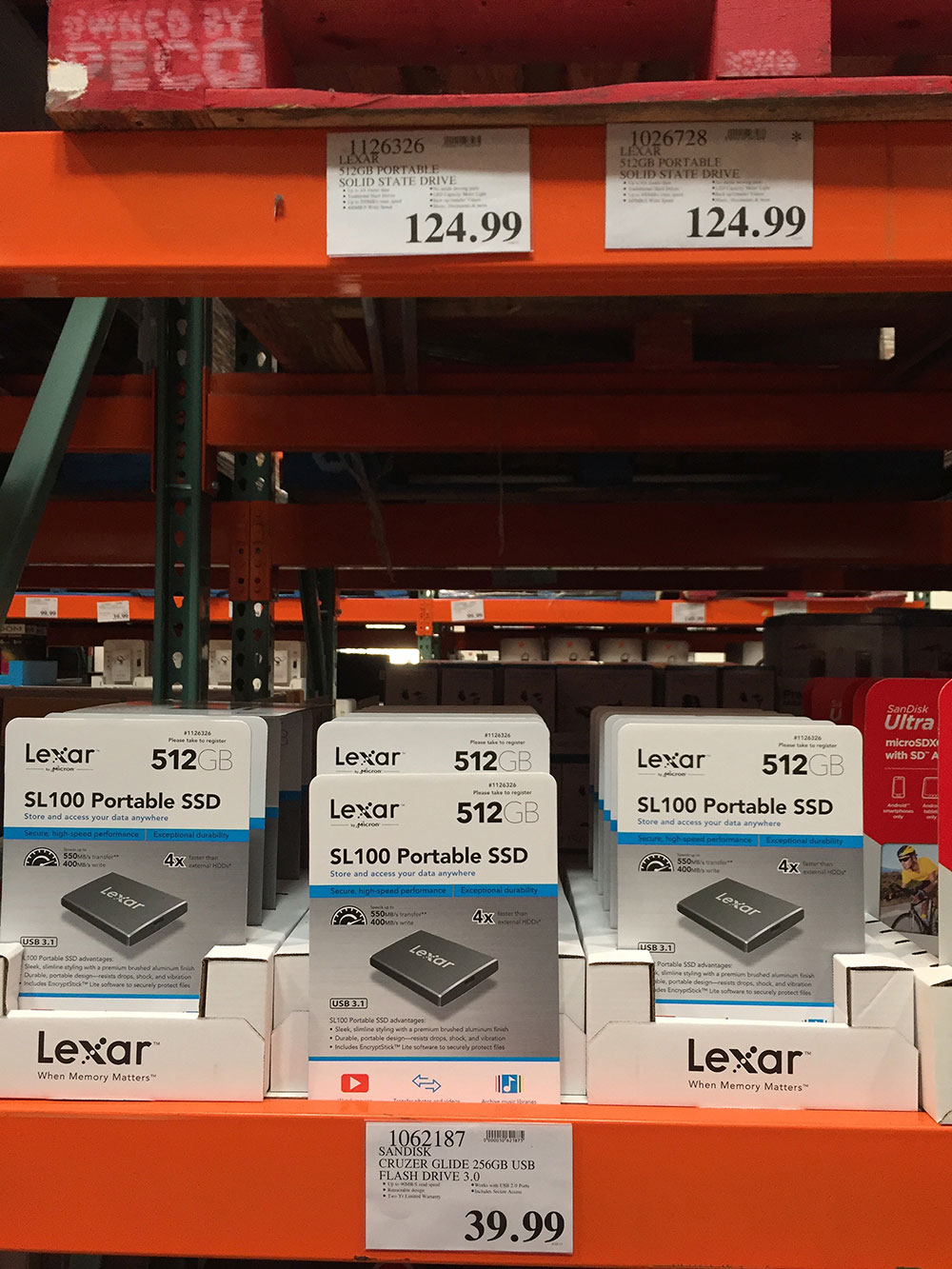 There are quite a few listings on Amazon and eBay reselling this unit for a lot more. And all they show is the cardboard placeholder from Costco. 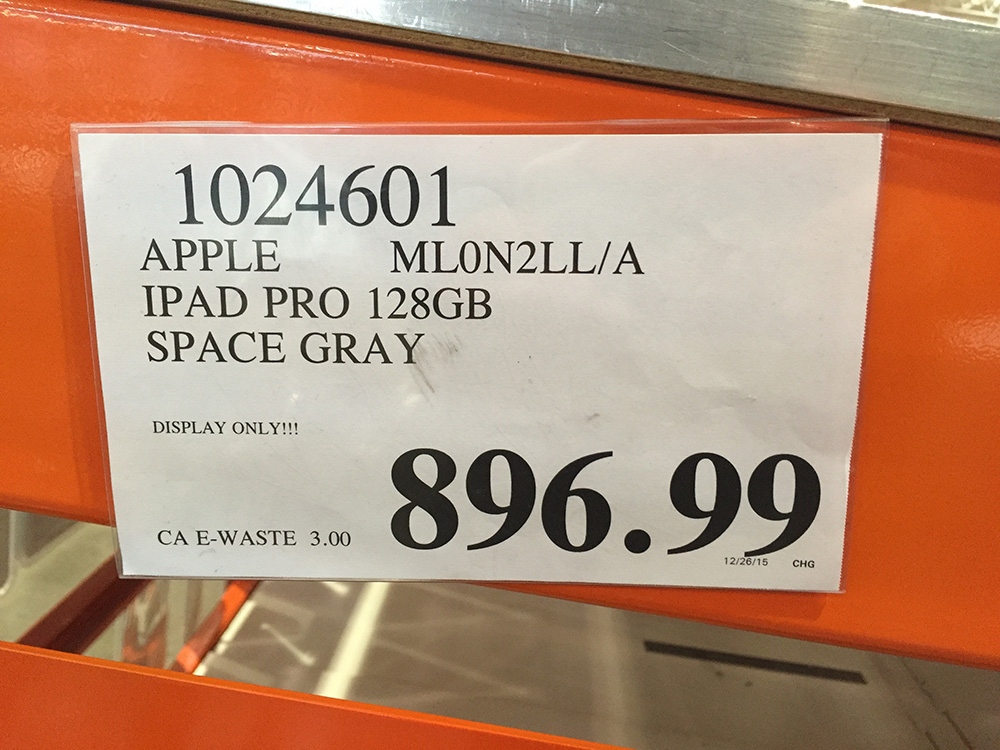 Costco is selling a set of Lodge cast iron skillets for $36.99. The skillets come in 10.25-inch and 12-inch sizes. I started using the 12-inch one at first, but switched over to the 10.25-inch skillet just because I had a lid that fit that skillet perfectly.

For quite some time, I’ve been thinking of getting a cast iron skillet, but avoiding it at the same time. My concerns were about the (1) weight, (2) bare handle, and (3) maintenance. 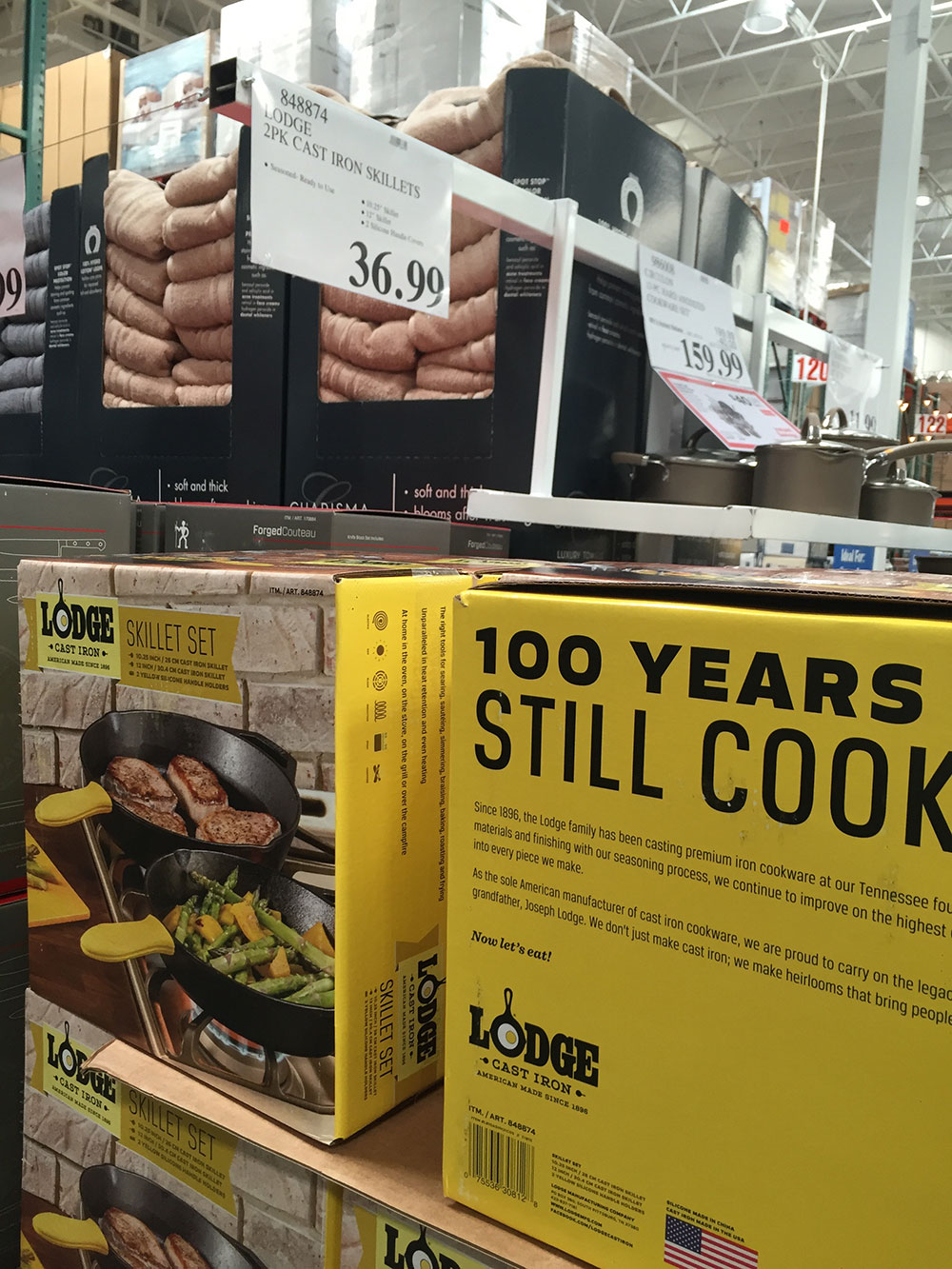 In terms of weight, I don’t find using the skillet to be too strenuous. I leave it on the stove top, and don’t touch it too much while cooking. As for the bare handle, Lodge included two silicone handle holders. However, I did see some heat damage to the silicone handle holder after one week of use.

As for maintenance, the skillet comes preseasoned. The pan isn’t too difficult to clean and adding a light coat of oil after cleaning has been sufficient so far.

For a long time, I wasn’t sure if the manufacturer’s instant rebates at Costco were true discounts. After some tracking, I’ve concluded that they are. So, when I see a temporary discount, I usually stock up on that item. 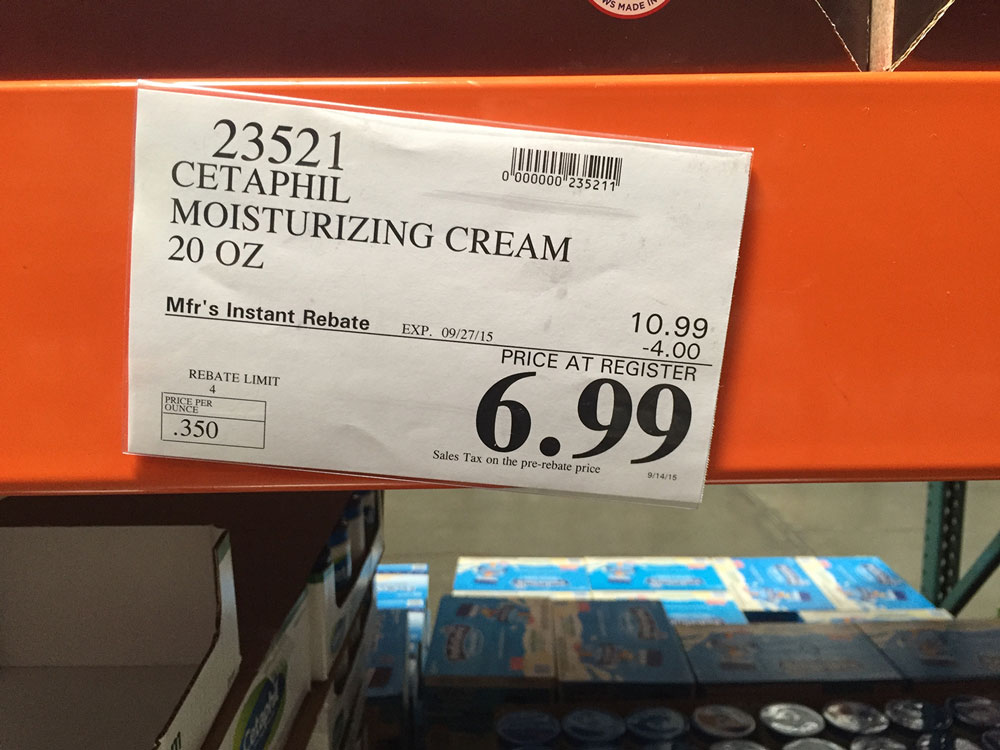 Now back to the Cetaphil Moisturizing Cream. Last year, Costco was selling the same item for $11.49 – $4.25 = $7.24. A year later, the original price has dropped 50 cents, but the manufacturer’s instant rebate was reduced by 25 cents, leaving a net savings of 25 cents.

I am always pleasantly surprised when prices go down.

FileMaker alerted me that a new version was available. When I looked at the pricing webpage, I had an Adobe déjà vu moment when the prices were displayed per user per month. However, when I scrolled just past the middle of the page, FileMaker showed me the individual pricing. For FileMaker Pro 14, FileMaker charges $329 for the full download, $349 for download with CD/DVD, $196 for the upgrade download, and $216 for the upgrade download with CD/DVD.

So, the electronic download costs $2.44 more, and can be downloaded instantly either from Amazon or FileMaker. Since the pricing is the same, you get to decide whether the money is split between FileMaker and Amazon, or whether FileMaker gets to keep the whole pot.

For the retail box, you save a couple bucks and get the product in a couple of days. The local government gets $15.57. Of course, the amount depends on your location. For states that do not collect sales tax, the retail box would be the counter-intuitive bargain.