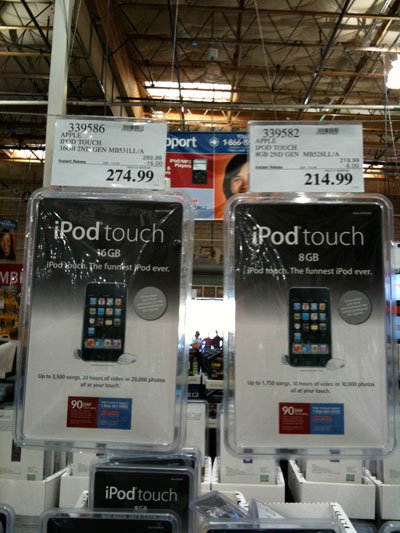 If you don’t want to pay full retail, Costco sells the 8GB for $214.99 and the 16GB for $274.99, which is a few cents more than Amazon. I was really surprised that the iPod Touch 8GB was selling for more than $200 because it really isn’t too different from the original iPhone 8GB. Imagine that. If you upgrade from the original iPhone to the new iPhone 3GS, your 2-year-old phone has a residual value of $200. That shows how much of a game changer the iPhone really is. The touchscreen of the IPod Touch/iPhone is so intuitive that when I recently picked up an iPod Nano and iPod Classic at the Apple Store, it took me about 30 seconds to get reacquainted with the scroll wheel, which feels less than cutting edge at this point.